Western Australia is the largest Australian state by far, covering a full third of the country’s landmass. This side of Australia bears a reputation for being empty desert and while two third’s of the state can be described as arid, there are unique and beautiful features here for those who seek them.

It takes a bit of effort to travel off the beaten path; we hope these selected Western Australian images inspire you to give it a try.

Mulla Mulla Wildflowers in the Outback 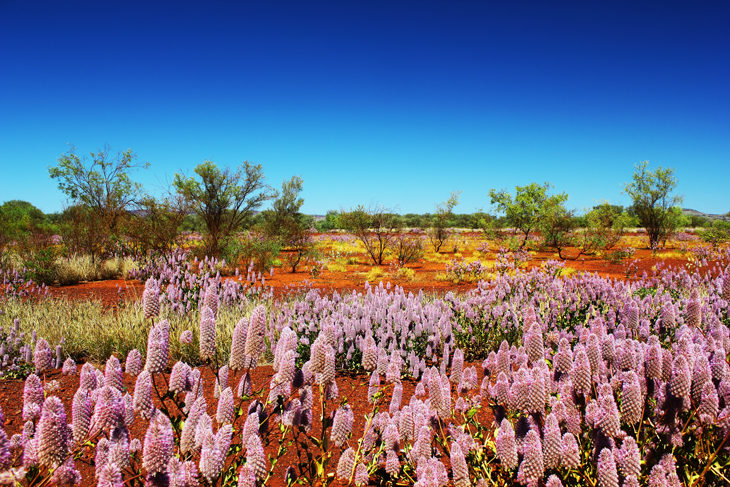 Ptilotus exaltatus, commonly known as Mulla Mulla, pussy tails, or lamb’s tails, is in many minds the iconic flower of the Australian Outback. This fluffy pink or purple flower prefers dry heat and blooms July through December on hillsides all around Western Australia. The state boasts more than 12,000 species of native wildflowers, 60% which are only found in Australia. Western Australia has become known for its wildflowers, publishing self-drive routes based around flower sighting opportunities and annual guides of what’s been spotted blooming where. 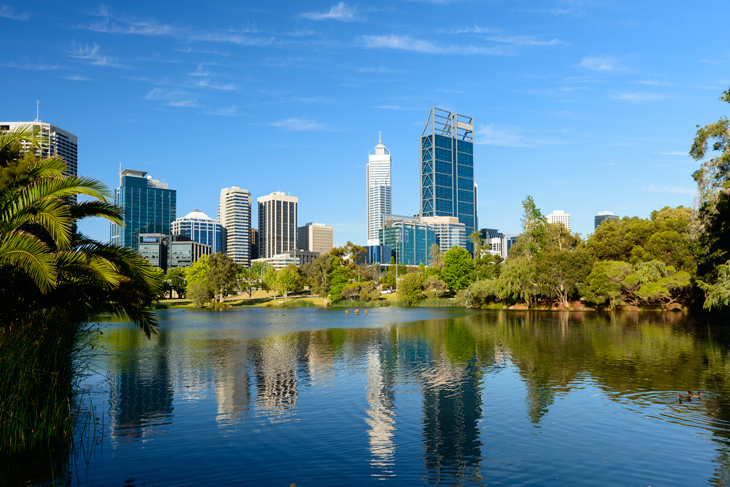 Situated where the Swan River meets the Indian Ocean, the capital of Western Australia boasts the largest central city park in the Southern Hemisphere, Kings Park, from which excellent views are afforded of the city’s skyline. In addition to plentiful shopping to be found in the CBD on and around Hay and Murray Sts, central Perth is also home to the large complex of the Perth Cultural Centre which includes the Western Australia Museum, the Perth Institute of Contemporary Arts, the Art Gallery of Western Australia, and the State Theatre Centre of Western Australia.

Enjoying more sunny days than any other Australian capital, laidback Perth may have a cosmopolitan core complete with glossy skyscrapers, but in its heart, it’s truly a beach town as one of the few places in the country to enjoy sunsets over the Indian Ocean. 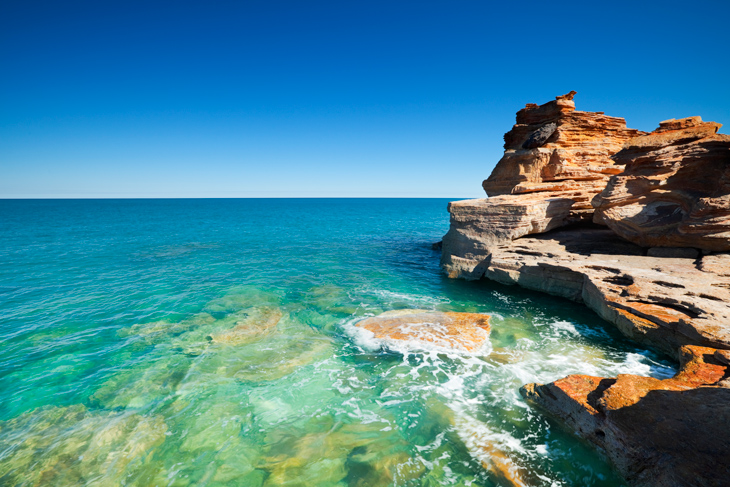 Just ten minutes from Broome’s town centre and adjacent to Northwestern Australia’s famous Cable Beach lies one of the area’s most photographed locales, Gantheaume Point. Here the desert meets the turquoise waters of the Indian Ocean and red rock cliffs overlook a family friendly white sandy beach. 130 million-year-old dinosaur footprints are visible at the base of the cliffs at low tide and a cast of them is also placed at the top for easier viewing.

A lighthouse was built at the point in 1906 and a keeper lived on site until a modernization in 1922 at which point the keepers quarters were sold. Patrick Percy became the next resident who built a pool for his arthritic wife Anastasia that would be filled by the ocean tides. The pool was damaged in 2014 and not repaired while the keepers quarters burned down in 2014.

The Pinnacles in Nambung National Park 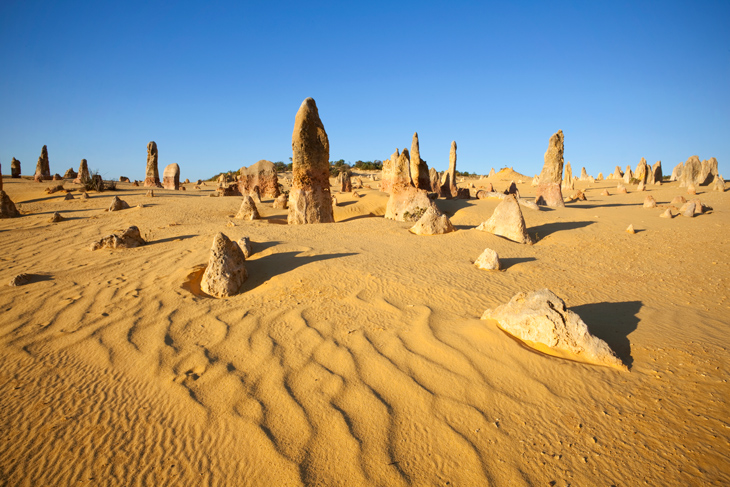 The centrepiece of Nambung National Park, thousands of weathered limestone spires that form the Pinnacles, stand in clusters several metres tall rising out of Western Australia’s yellow sand dunes, about three hour’s drive north of Perth. The pillars are 25,000-30,000 years old and composed of shells when this was once a seabed – after the sea receded, winds removed the surrounding sand.

Formed in 1994, Nambung is easily accessed from the fishing village of Cervantes. In addition to being an excellent place to enjoy locally caught seafood, Cervantes is also close to Lake Thetis, an inland salt-water lake with a population of rare stromatolites. 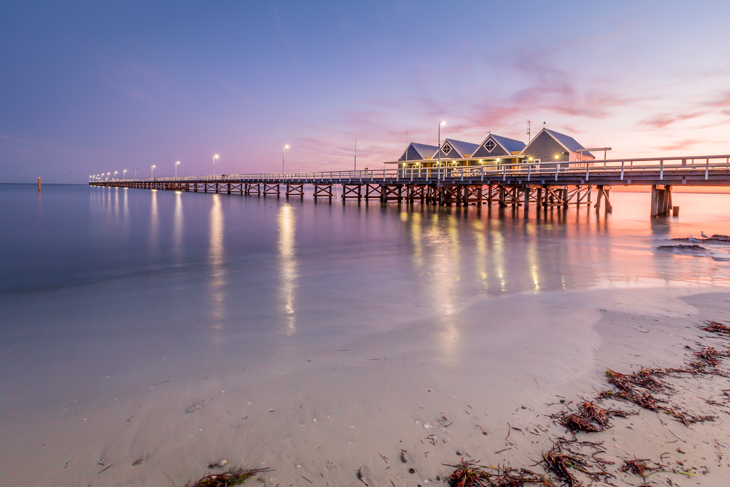 Billed as the longest wooden jetty in the Southern hemisphere, the heritage listed Busselton Jetty extends nearly two km out from shore on the southwest tip of Western Australia. Designed to enable logs to be loaded more easily onto ships in the shallow waters of Geographe Bay, the jetty was built in 1865, modified many times through the years, and closed to commercial ships in 1972.

Today, the Busselton Jetty is open for the enjoyment of tourists; for those who don’t wish to walk to the end and back again, a ninety-seat train runs the length of the jetty on a regular schedule. At the pier’s end, you’ll find one of only six operating Underwater Observatories in the world, where a spiral staircase allows you to descend eight metres underwater and look out through eleven viewing windows.

Busselton is located in the Margaret River wine region, a compact corner of the country, known for its farm-grown produce, relaxed beach surfing scene, over a hundred intricate limestone caves, and a growing gourmet cuisine culture. 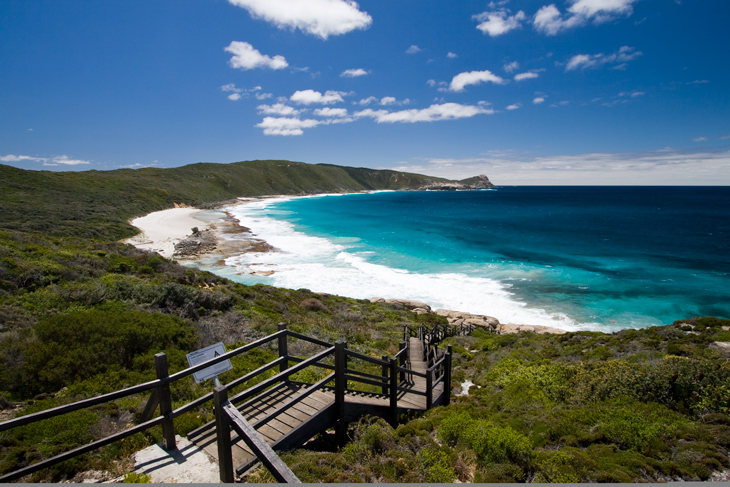 On the southwest tip of Western Australia sits Albany, once a significant deepwater port and the first colonial settlement in the state. Ten kilometres south of town, on the Rainbow Coast is found the rugged coastline of Torndirrup National Park, one of the first parks in Western Australia and today the state’s most visited.

Granite cliffs bear the force of the Southern Ocean and 213 metre tall Stony Hill affords 360-degree panoramic views of the town, harbour, King George Sound, and much of the park out to the ocean. Favourite features within Torndirrup include the Blowholes, where water is forced upwards through cracks in the granite, the Gap – a channel through forty metre tall granite walls, and Natural Bridge, where the ocean has eroded away underneath the rocks. 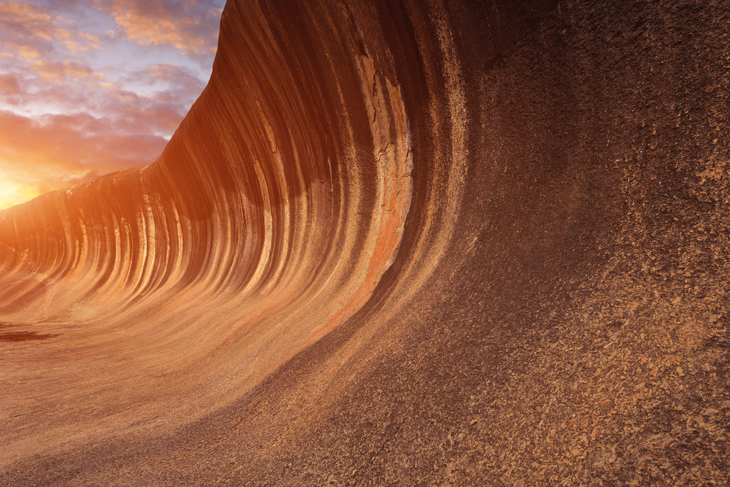 The north side of a solitary hill near the small farming town of Hyden, 45-metre-tall and 110-metre-long Wave Rock demonstrates the power of erosional forces over time. About halfway up the grey and red striped granite rockface is an odd-looking wall that funnels water to a storage dam for use in nearby communities. Other similar wave formations are found elsewhere in Western Australia’s Wheatbelt and the Hyden area is home to other interesting natural features: Hippo’s Yawn, salty Lake Magic, Mulka’s Cave with its aboriginal hand stencils, and the Humps. 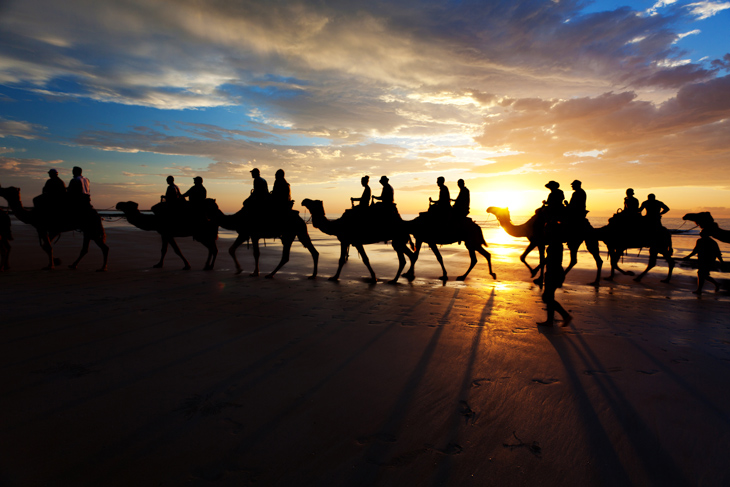 Twenty-two kilometres of shimmering white sand form Broome’s iconic Cable Beach, named for the communications cable laid to Java in 1889 and in use through 1914. The beach is relatively uncrowded, even during peak season, and you’ll see trains of camel riders morning, afternoon, and at sunset.

The camels were brought to Australia in the 1800’s from Arabia, India, and Afghanistan to aid in the exploration and development of industry in remote Outback regions- there are now over a million camels roaming throughout Australia. Broome’s history centres on the pearl trade, initiated in 1861, at which time Broome supplied 75% of all pearl shell worldwide for buttons – today, Broome is a hotspot for the cultured pearl industry.

The Horizontal Waterfalls in Talbot Bay From Above 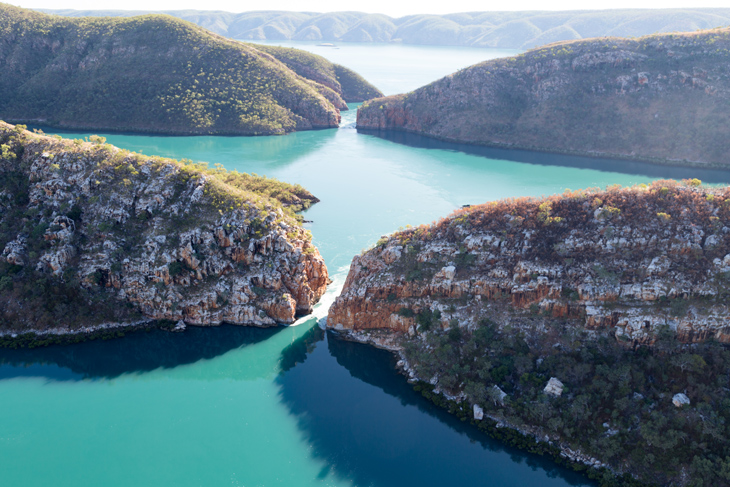 One of the must-see’s of the Kimberley, the Horizontal Waterfalls in Talbot Bay are a unique phenomenon resulting from the nearly 12 metre tides found in this region. Here in the Buccaneer Archipelago, waters are squeezed between two narrow gorges of the McLarty Range, creating whirlpools and changing direction of its flow with the tides.

Visits to the 1,000 islands of the Buccaneer Archipelago and Horizontal Falls can be arranged from the town of Derby, the first to be settled in the Kimberley and self-titled ‘Home of the Boab Tree’. However, access is by air or water only, with most people opting for a seaplane ride to view the spectacle from above. Derby is also the western endpoint for the Gibb River Road, which stretches across 660 kilometres through the middle of the Kimberley, a region that has fewer people per square kilometre, than almost anywhere else on earth.